The Importance Of Belief Systems

I remember when I first started learning about what it took to become successful, and began studying the people who were a success. One of the first things I noticed was that successful mompreneurs often started out just like any other normal person.

They did not necessarily come from rich families, or have a perfect education. However one thing they did have was a belief system that supported their dreams. In today’s Blog, I am going to examine our psychological belief systems, and why they are important in achieving success in life and business.

So What Exactly Is A Belief System Anyway?

Well, put simply, belief systems are things that you regard to be true, or you believe to occur in a particular way. For example, one belief system could be that only lucky people become successful.

These beliefs then edit your reality, by acting like filters in the brain. The world you see around you then becomes shaped by these beliefs. So your beliefs therefore have a big effect on how you act, and the things you believe that you can do.

How Do Belief Systems Form?

When you are born, you arrive into the world with no beliefs. You have no idea how it works, or what is possible, and so you have no filters in the brain. At this point you believe anything is possible, which is why children have such wild imaginations.

However because we have no beliefs, we have to learn them from someone. And because as children we spend most of the time with our parents, our beliefs first come from them.

So, for example, your parents may have been very optimistic people and believed anything was possible if you really wanted it. When you grew older there would be a strong chance you will also have this belief, and have the same optimistic outlook on life.

Alternatively, your parents could have had very limiting beliefs. They told you that life was hard and nobody except the rich make it in life. You will then adopt this belief and that’s how you live your adult life.

Other Sources Of Beliefs

Another major source that forms belief systems in children is school. For example, one common belief told to children is that if they don’t do well at school, and get high grades, then they will never be successful in life.

But if you look at who becomes successful, most highly successful people didn’t get good grades at school, and a large percentage of them dropped out early. So obviously this belief isn’t true. But for the people who don’t get good grades and then adopt this limiting belief system, it will most likely limit what they believe they can and ultimately will achieve.

So beliefs have a massive influence on our life and effect not only how we perceive the world, but also how we act in it. However whilst our beliefs may be formed during our childhood, this does not necessarily mean beliefs can’t be changed. This is why identifying and removing limiting belief systems is so important, as it could quite literally change your life.

Be careful what you believe because that is what you will experience. Your belief system is a mechanism which is uniquely yours. It is powered by your desire and controlled by your thoughts and actions. In other words, your success is measured by the strength of your belief.

So, today I want you to look at your belief systems. But first, you must be clear on what you want. How else would you know what you are believing in and for? Here are a few tips:

Research and learn as much as you can on how you can achieve your goal. Use all possible resources such as books, courses and people. Yes, people. Talk to as many people as possible who are already successful in what you want to achieve. Ask, ask and ask some more about what they did to reach success. Do not limit your contacts to only the people you already know. Introduce yourself by phone or mail, explain your purpose for contacting them and ask for a tip. The worst thing that can happen is that they ignore you. The best thing that can happen is that they become your mentor and offer support and encouragement. Chances are you will receive at least one great tip from many of the people you contact. This method is the least expensive and most rewarding.

Next, take the ideas you learn, embellish them and come up with your own creative process. Think of how you can approach your goal in a way that no one else has. Dare to be different. Don’t be afraid to take risks. What do you have to lose? Write out a list showing all of the best possible outcomes. Always maintain your concentration on your desired result.

BE BETTER THAN YOUR COMPETITION.

When you were a child and saw your older siblings or friends riding a bike (without training wheels), you didn’t look at their scraped knees and elbows and say, “Whoa, I could get hurt doing that.” Instead, you begged to try it for yourself. With a great deal of practice and often pain, you gradually learned how to maintain your balance. Before long you were trying to “outdo” your friends with your speed or fancy tricks. When you fell, you would get back on and try again with even greater determination. From your very first effort, you believed in your mind that if you got back on, you would eventually learn to ride. I bet you even knew in your mind you would be the best in the neighborhood, in your school, in the state, in the world!

If you see obstacles before you, then you will also only see problems. If you have hesitations that you plan will not work, then it will not work. If you are influenced by the power of negative people, then you will never be any better than they are. Believe in yourself and what you are capable of achieving.

When your desire to succeed is stronger than the pain, fear or frustration of failing, there is no turning back. I challenge you to develop those belief systems just like you did when you were a child before you learned about self doubt and negative criticism. Remember, anything is possible as long as you believe.

Make a commitment that you will not let anything or anyone, including yourself stand in your way of reaching your goals.

P.S: I’m so excited to share that The Ultimate Mompreneur Planner is launching this week!

Our Pre-Black Friday Sale starts on Wednesday 18th November, 2020 at www.ultimatemompreneur.com. Stay tuned to our IG page for updates and to find out how you can get on the waitlist for this amazing product. 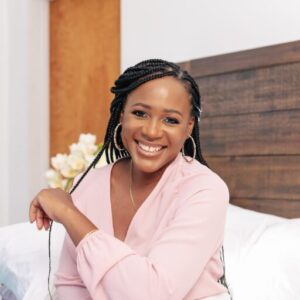 Hi, I`m Kelisha Mills! I`m a wife, a mom of 4, and an Entrepreneur currently residing in the Caribbean Island of Tobago. With over 11 years of practical experience as a woman entrepreneur, I have worked with some of the best international High-Performance Coaches and mentors in the world. I love sharing helpful entrepreneur information with other women like you :-)
Facebook
Twitter
LinkedIn
Pinterest
PrevPreviousCreating Your Vision for Your Business, Career, and Life
NextHow To Break Through Self-Doubt And Fear As A MompreneurNext